Natural Stones: Learn about the types of granites and quartzites-

Natural Stones: Learn about the types of granites and quartzites-

WABI-SABI AND THE STONES

2022 EXPO REVESTIR: 05 EXPERIENCES TO CHECK OUT AT GRANOS’ STAND 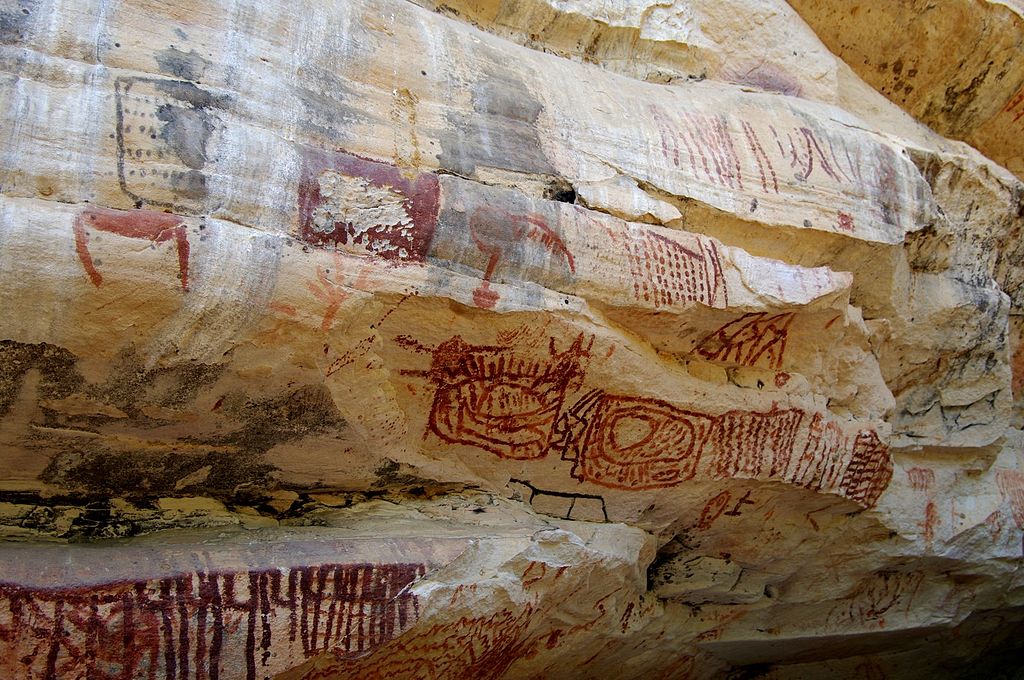 For millennia, planet Earth has provided mankind with rocks for the most different uses. At first, these stones were used as tools, as shelter, and as the backdrop for telling their stories and recording their arts. More recently, however still “millennially” speaking, men found in the natural stone the key elements to carry on recording their history, but in a more grandiose and daring way: the construction of their empires. In the meantime, incredible projects were created. Men cut, squared, moved, and built the unimaginable, from pyramids to temples for their gods and palaces for their nobles.

All Giza Pyramids Masterpieces, relics of our history, were carved, sanded, and polished by hand almost as if by a miracle for their time. Using natural stones as covering, extracted and processed to be used in buildings, is something that comes from ancient times, with remarkable appearances in palaces such as those in Europe. First used on floors and walls, the stones quickly found space on tables, kitchen countertops, bathrooms, and wherever else creativity and necessity allowed their use. From then on, the use itself showed the professionals who chose these stones — already as coverings materials for their projects — that some of them were more suitable than others for each type of application. Rocks that wore out mechanically, stones that were more or less susceptible to scratches, stains, and other problems that many times led their choices to suffer from irreversible pathologies, severely damaging projects that were so greatly desired. Thus, architecture and design professionals, in addition to the consumers themselves for whom the projects are carried out, began to demand from stone suppliers more information that would guarantee their choices, when the question was about stones for coating, also known as ornamental stones. This way, considering this field, a strong process of study, technological characterization, search for new stones, new mining systems, and mining of these stones in nature began, which made the stones industry capable of providing products compatible with each specific demand for each type of project. All this, in a way that would guarantee any enterprise, from small residences to large corporate buildings, or important public facilities, everything it proposes: to give beauty, longevity, and timelessness depending on the type of stone/rock chosen for each project. Within this scenario, the renowned marbles did not lose their space, but began to share it mainly with granites, when extraction and processing technologies only allowed processing up to that point of rock hardness. In a nutshell, in the last two decades, mainly here in Brazil, with the development, evolution, and transfer of the diamond wire technology from the quarries to the factories, quartzites came out. Stones of very high hardness, extremely resistant, and of unique beauty, in addition to being timeless, quickly became a trend, and, today, it can be said that they are a reality that has come to stay in the segment of natural stones for coating.

(Perla Santana Quartzite) WHAT ARE GRANITES? Conceptually, granites are stones composed essentially of quartz and feldspar and to which, in much smaller amounts, mafic minerals such as biotite or felsics like muscovite are often associated. They are formed by a slow cooling process, giving quartz and feldspar crystals time to grow larger. Thus, it contains colors that correspond to the shades of feldspars and micas, grains of granite colors of different types, with granulometry that can vary from a few millimeters to centimeters in diameter, one can say. As in the White Alpha granite, for example, one can notice gray dots, which are quartz crystals, the white area, which is feldspar, albite/plagioclase in this case, and black dots, which are biotites.

(White Alpha) Good quality granites are characterized by high amounts of quartz, above 25% — Alpha has got between 30% and 35% — low absorption and high wear resistance. Granites from Ceara, in this case, stand out in the world for technically meeting rigorous application demands. Commercially, however, ornamental and coating stones, called granites, are not always really stones from this petrographic group. For instance, materials such as Matrix Motion, which is treated as granite, but in reality, it is schist, as well as other ones like the Imperial Brown, which is syenite, the Black Ceara which is in fact granobrite, and the stones from the Marinaces family, which are actually metal conglomerates. High-quality granites, due to their good technical performance, among other applications, are widely used in floors of high-traffic equipment, such as airports, shopping malls, ventilated facades.

White Alpha granite flooring at Clube Hebraica in São Paulo Because of this type of use, granites, when polished, turn into not very good options for smaller interior works, such as residential ones, precisely because of their pigmentation. Because they were so much used in areas of collective use such as shopping malls, they started to be seen as a “common” coating. Intending to become a trend again, the stone industry had to reinvent itself and launch different and innovative surface treatments, which take the granite to a higher level, removing it from the commonplace. Treatments such as Matte and Velvet make granite stones special and unique, in addition to making any indoor or outdoor space contemporary, modern and timeless. This can be seen in works around the world, such as the Louvre Museum in Abu Dhabi and The Shard in London, where materials with opaque and textured treatments were used.

Museu Louvre de Abu Dhabi WHAT ARE QUARTZITES? Quartzite is a metamorphic rock formed basically by mineral quartz, that starts in the form of grains and sand like the ones in dunes and riverbeds, which, as time goes by, are compressed until they form sandstones. However, if buried deeper under layers of rocks and associated with an increase in temperature and pressure, they lose their original shape and merge with the ones near them, forming a dense and durable rock. Normally, these rocks have light tones, with the possibility of changing to other colors due to additional minerals carried by the groundwater, transferring tones such as green, blue, and red. Among the stones for coverings, the hardness of quartzites is the highest, because they have more than 75% of quartz in their composition, reaching in some cases more than 90% of quartz, like Perla Santana, which has got 94% in its composition. 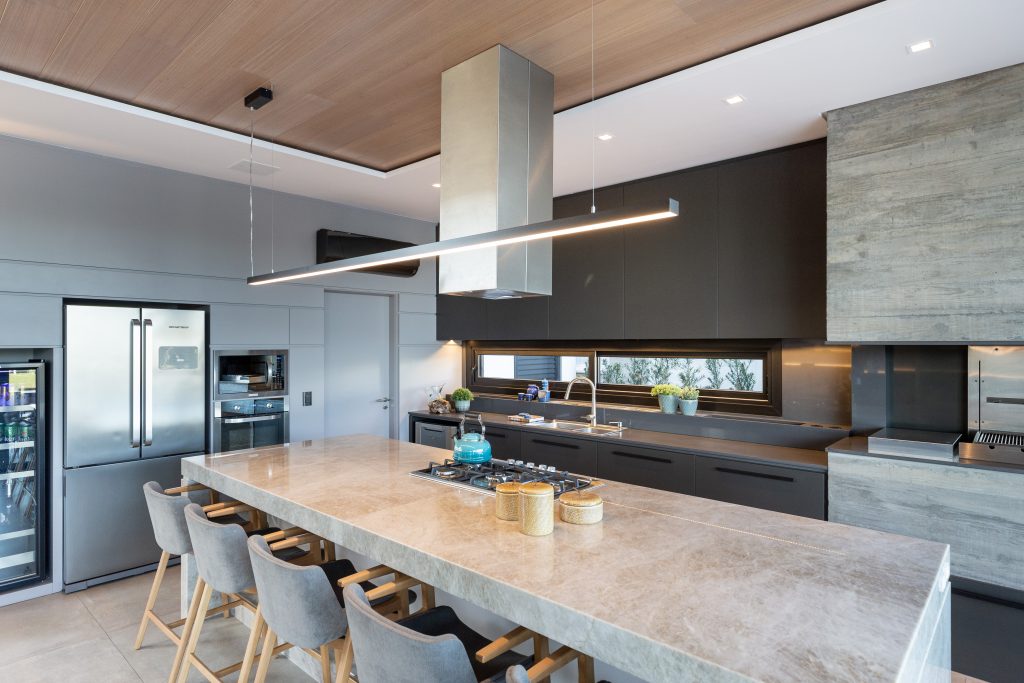 Bancada Perla Santana. This makes quartzites harder than glass or than a knife blade, which can easily be tested when trying to scratch the stone with one of these elements. Besides, they are materials with very low porosity and absorption when “crystalline”, which indicates a very high degree of metamorphism, that is, when the sandstone — protolith, the rock that preceded the metamorphism and which generated the quartzite — suffered the highest temperatures and compressions, reaching 800ºC. Not to mention the crystals that, in the beginning, were sand and ended up merging and forming this super stone, Perla Santana, a true quartzite. Another element that evidences a quartzite is the non-reaction of the stone to the exposure to acids. Marbles, on the other hand, no matter the type, react to these elements. It is worth mentioning that almost everything people manipulate in a kitchen has acidic substances in its composition, like tomatoes, lemons, or even olive oil and wines. Attention to this matter: in nature, there is a group of rocks called meta sandstones, which are nothing more than sandstones that have also undergone metamorphisms, however, of low degree or intensity.

Pedra Montreal What evidences this is the low cohesion among the crystals, causing these rocks to have from moderate to very high absorption. These are stones that do not react to acids, with high hardness levels, and that are formed from the same quartz as quartzites. However, their formation is “somewhere in between”, which is didactically illustrated in the following pictures. Quartzites are the great revolution in the area of ornamental stones. Their appearance in nature dates back to 600 million years. However, because of its high hardness and extremely fragile structure when in nature — due to fractures suffered in its formation process that go up to extreme levels —, it took a revolution in the industry and mining so that the stone could be mined and processed. The diamond wire saw, which emerged in Italy in the 1970s, arrived in Brazil in the 1990s and got into the industries at the end of the same period, reached its peak only in mid-2010 when quartzites could be extracted from nature and processed in the industry. They are unique stones that add value to any project, as they have a classic beauty like the noblest marbles, with the maximum resistance that only they have in nature in amounts and conditions of use for coatings.

With the advent of the Internet and the great propagation of the volume of information regarding the composition of synthetic materials, many companies began to appropriate the word quartz, transforming it into value for their products. However, just having quartz in its composition does not make the material a quartzite. Nowadays, there is a great amount of information about sintered synthetic materials, ultra-compacted porcelain tiles with high resistance levels, and the convenience of using a standardized material, once natural stones have nuances that are “produced by nature”. The thing is: none of them have the power of a history that was formed 600 million years ago, going through the most extreme weathering processes that something can go through, being “forged” inside the Earth, and maintaining the unique characteristics that all of this produces, generating a unique and timeless beauty. 3 MAIN DIFFERENCES BETWEEN GRANITE AND QUARTZITE